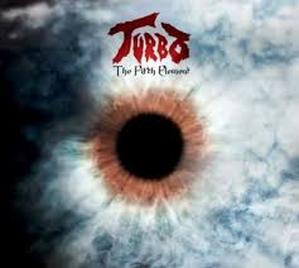 Metal Mind Productions, 2014
1. Think And Fight
2. Taste Of Forever
3. Heart On The Pyre
4. The Fifth Element
5. Smash The Wall
6. Handfull Of Sand
7. Relentless
8. Amalgam
9. Light Up The Night
10. This War Machine
11. Blues Measured By The Clock Ticking
12. Smash The Wall (acoustic bonus track)

Turbo has been around for the most part since the very early 80's and have morphed over the years from a hard rock band into a bit more of a speedy thrash band before settling back into a more traditional heavy metal vibe. With about 14 albums to their credit thus far (many in their native Polish, but a number of them in English such as their latest offering) and are a very well respected band in their homeland.

This CD started out pretty stellar with the anthemic Think And Fight blazing out of the gates in excellent style. Following that number were a couple of pedestrian and lackluster numbers which didn't quite measure up. The title track is a bit schitzoid and painful to me, not sure if they were going for something newer or not as it sounds like a weird mix of modern music laced with traditional sounds and it didn't work for me unfortunately.

Smash The Wall comes along and things pick up again finally and though the track comes across more as a traditional hard rock number than metal, it is still a really slick piece of work and a sign that there is still some gas in the Turbo tank. Handfull Of Sand also keeps things up as the album slowly begins to build up some momentum.

Light Up The Night is a really good track that also fits somewhere in the metalrock category and This War Machine follows it up nicely with it's quasi-ballad feel before going into the most frenetic and sharp vocals on the album as they transition into powerthrash. The last song on the album other than the acoustic bonus track is a weird progressive song which starts slow and builds it's energy up but I have to pass on it as there is just too much to it. They tried to do a bit too much with it, even some Mexican type elements in there, not really sure how to take it really.

As for the rest of it, the production is really solid and the musicianship is very good (as long as they have been together, I would hope they learned a thing or two about playing music). Overall not a bad album by any means, though it could use a couple tweaks here and there and maybe a song or two cut out to tighten the overall sound. I do need to search out some of their back catalog ... at least the English ones so I can get a better feel about the band's history.