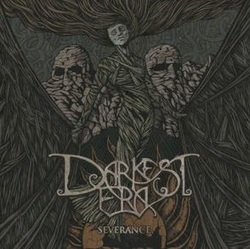 Cruz Del Sur Music, 2014
1. Sorrow's Boundless Realm
2. Songs Of Gods And Men
3. The Serpent And The Shadow
4. Beyond The Grey Veil
5. Trapped In The Hourglass
6. The Scavenger
7. A Thousand Screaming Souls
8. Blood, Sand And Stone


Here we have the second full length CD from Northern Ireland's Darkest Era (they also have put out a pair of EPs prior to that). Darkest Era are known for their Celtic Folk Metal and are one of several bands from the region that are trying to carve a niche making that sound. Their first album was full of folksy elements merged with some pretty solid hook laden power metal and reached critical acclaim on Metal Blade Records.

The band is now on Cruz Del Sur Music for the second offering and there is more of the same as far as the folksy elements and their sound has not changed overmuch, though it seems to be more progressive sounding and the folksy parts are not quite as strong as the first album. In fact they seem to lack in the punch department as well now. Not sure if they were trying to go a different route but the little nuances of the first album seem to be missing a bit on this one.

There are still good moments on here such as on Songs Of Gods And Men and on The Scavenger for example, but the bulk of the CD seems too safe for my liking. The tempo also tends to stay repetitive which in turn made the songs a bit too patterned and it was hard for me to keep my focus on the music itself.

Not a terrible album, but also not one that I would find myself gravitating to for my next metal fix either.