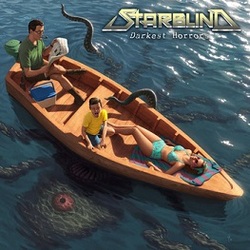 The production is pretty darn good here and speaking of Stark, his vocals are very strong with a bit of a Sean Peck from Cage to them. These are enhanced on several of the tracks with some excellent gang vocals. The band has a bit of a power metal gallop but is still basically a traditional metal band, though tracks like Blood In The Night do lend themselves to some Judas Priest comparisons.

The band shows it's well-roundedness with tracks such as the slower Crystal Tears, mid tempo Darkest Horror and the quasi-epic ender Temple Of Set. These guys are not one trick ponies by any means and that makes this album never really tire as you go through. A few of the tracks don't quite measure up to the others, but the strong ones really deliver to make up for it.

Overall I find this release to be superb and miles above so much of what has come out before it. I just hope the family on the boat made it out okay, but somehow I doubt it...