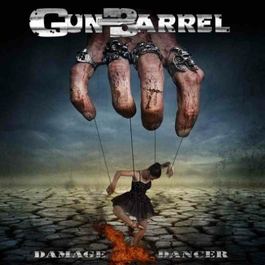 Album number six for the uncompromising power metal juggernaut that is Germany's Gun Barrel. After such behemoths such as Power Dive, Battle Tested and Outlaw Invasion to their credit, Gun Barrel continue to put out straight up power metal again and again. Hailing from the Primal Fear, Brainstorm and Mystic Prophecy side of the spectrum with a bit more melodic elements thrown in at times, Gun Barrel really know how to deliver the goods!

Actually after a few listens it is quite obvious there is more melody and less bite than on some of the other releases that Gun Barrel has put out in the past. That is just fine though as the melodies are top notch! Judgement Day, Passion Rules, Building A Monster all follow behind Damage Dancer which is an epic track in it's own right and combine to make the first half of this CD quite a success story!

The second half of the CD keep things moving nicely without quite getting totally balls out (except maybe a bit on Heading For Disaster and Vultures Are Waiting in parts), but with other good tracks like Ride The Dragon and Back Alley Ruler, the CD is still very good from one end to the other!

Okay this may not be a blistering beast that will blow the doors off of the car as you tool down the highway, but it sure as well will get your toes and head moving and put a smile on your face! Metal on!!