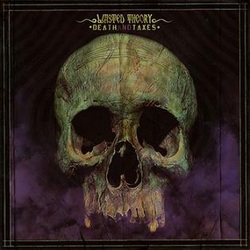 
Blazing out of Delaware comes this pretty new Southern/Stoner metal band that I had the privilege to check out at a local festival. I must say that during the two day festival they were without a doubt my sleeper surprise for the entire show (and the show was loaded with some talented bands so that is saying quite a bit!)

The band has been around for only a couple of years and this is their first full length release after a previous EP was released with a couple of different band members. The production is top notch for an indy release such as this with a very nice blend of instruments and vocals. Very crisp allowing the music to come across beautifully. The songs are masterful and these four guys really know their craft. The style is booze-soaked swagger and if I didn't know better I would guess this band was from Texas or Alabama maybe. I guess they are from Southern Delaware possibly? Anyway, they definitely have the Stoner South sound down to a tee.

Larry Jackson's vocals are particularly perfect for the music in question. He doesn't show much range here, but then again how often do you have many high notes or anything faster than mid tempo in this style of music? Therefore I can't attest to his overall singing skills, but for the task at hand here, he is dead on. The guitars are also spectacularly done here and chug mightily and you can't help but get caught up in the vibe.

There is a veritable smorgasbord of excellent tracks here as there is no such thing as filler to be found on the album. Dead Is Dead starts it out and really immediately grabs you to get into the album. After that it just continues on with one classic after another as Hellfire, Absinthe Queen, Celestial Voodoo Loung, Hexes and Tire Iron (The Stone Giant) can sure deliver. You won't get bored listening to the entire ride of this album!

The only sure things are Death, Taxes and Wasted Theory!!