Eternal Winter - Within The Castle Shadowgate 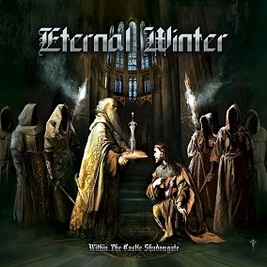 Majestic Metal Records, 2014
1. True Knight's Overture (Prelude To Dark Encounters)
2. Majesty Of Starlight
3. Under The Spell
4. Rumble With The Tyrant
5. An Oath Of Vengeance
6. Ride Of The Crimson Pegasus (Flight To The Island Of Dreams)
7. Within The Castle Shadowgate
8. The Spirit
9. Moonlight Over The Crystal Valleys
10. Forboding Shores (Rise Of The Serpent King)
11. Leviathan's Wrath
12. Hymn To Ereyth

Just when you thought the epic power metal storm was starting to lose it's steam, along comes Eternal Winter to ensure that there is another coldfront moving in. Okay all puns aside there have been a number of solid debut releases in the States lately in the epic power metal mold, and Eternal Winter is one of them (okay I am discounting the several EPs they have released prior to this).

Coming out of Maryland, Eternal Winter feature the interesting vocals of Matthew Knight. His voice is definitely unique, and seems more suited to speed metal than the epic power found on the CD, but in a way it is refreshing and gives EW that something different that make them stand out a bit from other bands. The contrast is blatantly obvious on such cool tracks as Under The Spell with his shriek vocals forming a distinct difference to the more majestic and almost hymn-like qualities of the song. It really stands out a bit.

Songwriting, production, artwork, it is all top notch here and the band have some great potential. I am not sold on quite everything they have on the CD and I think if one or two tracks were cut off it would be a much tighter and more effective release, but for debut CDs go, you can not find much fault here. Eternal Winter are definitely worth checking out and maybe more importantly, they are a band to keep an eye on in the future!