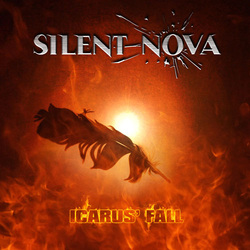 Silent Nova is a newer melodic power metal band from Germany and this is their first (and so far only) offering. Pretty short as far as full albums go, Icarus' Fall is a pretty solid slab of mid tempo and melodious power metal. There is plenty of hooks in the guitar lines and to keep things moving, and the music is not boring like can happen sometimes with this style of music.

The production is pretty crisp and the music is very well written, both of which are really good for a self-released little gem like this. Overall you get the feel that the musicians are consummate professionals on this disc and that they are taking their craft very seriously. Very mature sounding metal from such a young band.

Tainted Red, Icarus' Fall, Free, Seduction and Existence Denied are all really good tracks that are worth listening to repeatedly and in fact they all have ended up on my own personal playlist. Lost Freedom is also pretty good as well and makes a great note in which to end the CD with.

Not sure what is the next step for this very talented young band and since it's been a couple years since the release of this album, I really hope they are working on some new music. I believe they have a new singer so I am curious to see how their sound has changed since this really solid debut album came out.

Bands such as this are a sure sign that metal is still strong and won't be fading away anytime soon!