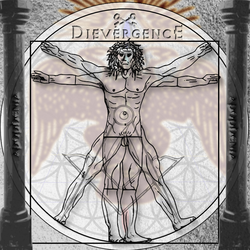 Self-Released, 2014
1. The Final Battle
2. Release Of The Dragon
3. Disheartening
4. Darkest Before The Light Goes Out


Sweden strikes again as we have another band to keep an eye out for from a place that is overly crowded with top notch musical acts. Dievergence however, are a bit different with a mixture of the usually melodic sweet vocals, but with a hint of something darker with some gruff vocals mixed in there. A bit of progressive power metal, maybe some 70s hard rock and a few other wrinkles tossed in as well!.

This EP has four tracks on it and each one has it's own very distinct sound and feel, making this a very versatile band with a lot of songwriting savvy behind them. Despite that, they are very cohesive and this is definitely a singular project full of very good musicianship, great harmonies and very clean production. Overall a hit every which way possible.

I decided after numerous listens I could not really pick one song over another as there were parts of each that I really dug, from the two part vocals of Release Of The Dragon to the incredibly infectious chorus of Darkest Before The Light Goes Out and the epic feel and vibe of The Final Battle, each song I heard was my favorite song WHILE I was hearing it!

I really enjoyed listening to this CD and the fact that it stayed in my player for quite some time despite having other reviews to write speaks quite a bit for my overall thoughs on this little nugget. Point deducted for being an EP (yeah I am greedy and want more!)