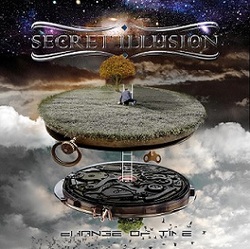 Second full length album from these melodic power metallers from Greece. I use the term power loosely as there is not really much power metal to be found on this album. It is more straight melodic metal than anything else as far as I can tell. The production and songwriting are solid here and everything comes across a bit on the sugary sweet side of the spectrum, which isn't necessarily a bad thing.

Overall though, I was expecting a bit more of a guitar based sound here, not totally heavy or anything of course considering the band's history, but there isn't a whole lot of riffing or vocal changes to really shake things up either, giving the whole CD a bit of a cruise control sort of a feel to it. Most of the songs move about on a mid tempo keel and the band seems to struggle to break out of their comfort zone.

I will say that the album does grow on you a bit with each listen, and there are some variations here and there and certain tracks such as Born Once Again, Change Of Time (despite being an instrumental is a pretty solid track) and Point Of No Return that really stick out.

Unfortunately there is just not enough changeups or memorable moments with this music and it just sort of is there. Very talented musicians but they need to come out of there shell a little more.